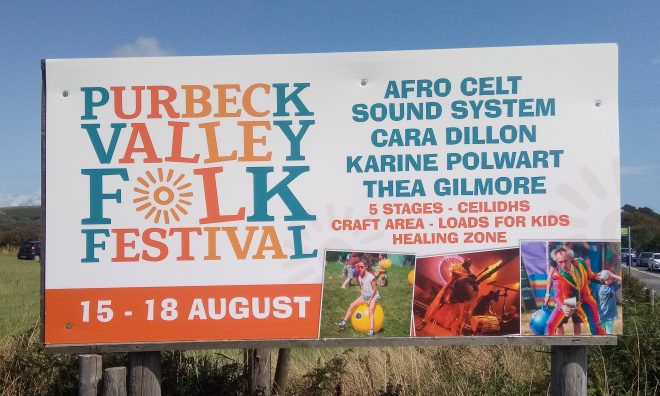 I’ve been meaning to write up our time at Purbeck Valley Folk Festival for the past two weeks but I think I’m still having a bit of trouble processing exactly all the amazing things that took place. If I’m honest the biggest distraction has been watching, pretty much on repeat, the little video of Cara Dillon and band playing Raggle Taggle Gypsy in one of the beautiful Gypsy Caravans that was our wow factor this year, but if you watch it you’ll see why.

Weirdly I had written to Cara Dillon back in January but I don’t think she’d ever received my letter. It had been to ask if she would come and visit us at our stand to help spread the word for handwritten letters. I’d promised her I’d try really hard to get her a Gypsy Caravan if she said she would, so it was by some kind of wonderful serendipity that not only did the kind owners of the wagons, Derek and Carole, say they would come but that a spontaneous recording took place on the Sunday of the festival before Cara Dillon’s gig in the evening. At this point in time it’s currently had 87K views (and counting!). Obviously so many things had to come into play to make it work as it did, but really without the humble handwritten letter the caravans wouldn’t have been there. Which I feel is a big “HOORAH!” for letter writing without a doubt.

As with last year I’m not sure about going on and on about all the lovely things that happened but 1) maybe you might like to hear how letter writing and its knock-on effect really matters still, and 2) there really were some lovely things that happened. So many people came and stopped by to write letters and festival postcards especially designed and printed for our stand. Folk from last year returned (one member drove all the way from Devon for the day!) and it really was like hanging out with old friends. It was heartwarming sharing letter writing tales and seeing so many old and new faces, all with interesting stories to tell. Our Society has always been about including everyone so it was lovely to look at the people that joined us during the festival and see that what we were doing was truly cross-generational. The inclusiveness of it is one of the biggest joys for me – that it can be for everyone and everyone can take part whatever age or background.

Even the squally weather on the first day played to our advantage in that the very lovely Old Man Luedecke, all the way from Canada (who I’d also written to inviting him along to our “handwritten letter revival”), was able to come and shelter and eat cake and sit by the woodburner in the big wagon with us, while the wind and rain lashed down outside. In his set he sang a song called “Sardines” (about the fish not the game), but it seemed rather fitting when you know that we managed to get 12 of us in that small space. It was very funny. I don’t think between us we managed to get a decent photo of all of us crammed in but it didn’t matter. It was a memory to treasure forever with or without a camera. I have never been so soaked to the skin from dashing back to the tent to find a book I needed to show him but the cockles of my heart have never been warmer. And again all because of a handwritten letter.

There is so much more to tell you about our time at Purbeck Valley Folk Festival, not least all the enthusiasm and love for handwritten letters and their place in so many people’s hearts. The photos below hopefully paint a picture of our time there too but most importantly be encouraged. Our handwritten letter revival is gathering momentum.