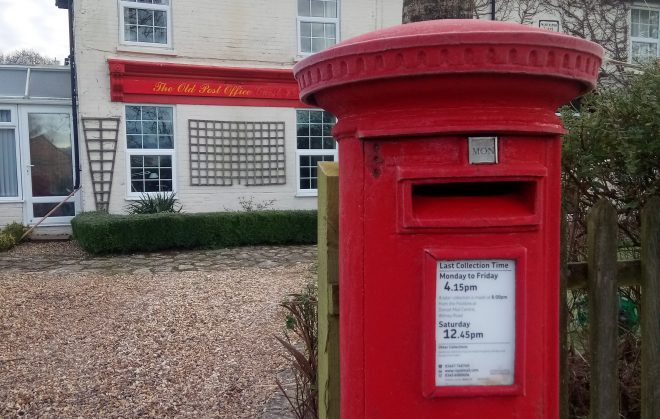 There’s a mystery and romance about postboxes, don’t you think? I don’t know what it is that I find so romantic about the sending of letters but I’ve almost decided the sending is equally (if not slightly more so) as lovely as the receiving. It must be the whole process not least the dropping my selection of missives into a chosen postbox. And when I say “chosen” I do mean like in those epic type films like The Matrix where there is actually a “chosen one”. I probably need to explain…

Postboxes. They act like portals don’t they. I mean clearly they don’t, it’s a postman that comes and collects my letters each afternoon and in fact I see the big trucks and vans driving off to the Bournemouth depot on a regular basis but as I don’t sit and watch the postbox physically being emptied (I’m not that weird), it always feels like magic that my letters to all over the country and beyond get delivered pretty much by the very next day.

I have a new (to me) postbox that I’ve been frequenting because of a new job. I’ve even been carrying my letters in the car over 15 miles to put them in it because it really appeals. I’ve started wondering what the postman thinks about all these wax-sealed parchment paper affairs or crazy child-like stickered envelopes suddenly turning up on their patch. It feels like something out of a novel. My new drive to work takes me past Corfe Castle twice a day, in all her ruin and beauty, along now busy, but still ancient highways that cross the heathland, and past earthwalled towns and flooded (of late) flood plains. If I’m lucky I get to see the steam train from Swanage Railway too.

The last little bit goes down a winding road over a sweet humpback bridge and past an old Post Office Guesthouse (now just a house) with its original GR postbox outside. It’s my new muse. I like that it’s off the beaten track. I like the thought of the postman, once perhaps often disappointed at an empty collection run, now finding letters to Oxford, Australia, Poland, Lincolnshire, Cornwall, ones to Edward Fox and the Yorkshire Shepherdess, and a few postcards every now and then in there. I do hope it’s the same person each time. I feel some connection with a stranger and that I’ve put my trust in them wholeheartedly to send my wafflings around the world.

I like to think maybe they wake in the morning and in that half light of coming round they ponder what might be waiting for them later in the day. They will be disappointed on occasions because I’m only at the job four days a week but weirdly it’s a motivator for sending out more letters next time I pass. Maybe there are other people doing the same for the same postbox that I don’t know about. And I still do use the busier ones in town but my little silly romantic venture made me want to encourage you all to find a lost and lonely postbox out in the sticks and fill it with magic.

Of course by magic I mean handwritten letters.

One thought on “Adventures in Letter Writing No. 60: Postbox Portal”