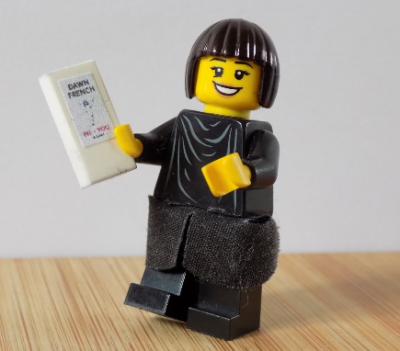 Well last Saturday’s breakfast was quite exciting. Just as we were eating our croissants (tres continental) the post arrived. I only went and got some post from the one and only Dawn French! The signed photo was lovely but the little note with it was lovelier! Mostly because it was written in her own fair hand, and well I know it could just be me that thinks that’s fab, but I think that’s fab! Not in a crazy fanzine way, just in a “That’s Dawn French’s handwriting that is” way.

I don’t write to celebrities in the hope of a signed photo. It just tickles me to write to people off the telly box to see if anything comes back, plus I am kind of fascinated about what people’s handwriting looks like. Just the idea of sending my silly waffle out into the ether, to wonder if it will ever arrive at its destination, i.e. the person you’re writing to, hence why it’s lovely when something actually does comes back.

Anyway, course Dawn French would write back cos she’s lovely. And we’re practically best friends now (hahaha). The kids and I made her out of Lego holding her new book “Me. You. A Diary” (long story!?) and tweeted it to her. She only went and retweeted it and then copied and reposted it a few days later. I’m guessing 70 retweets and 1.8K likes isn’t “viral” but we still felt pretty chuffed. 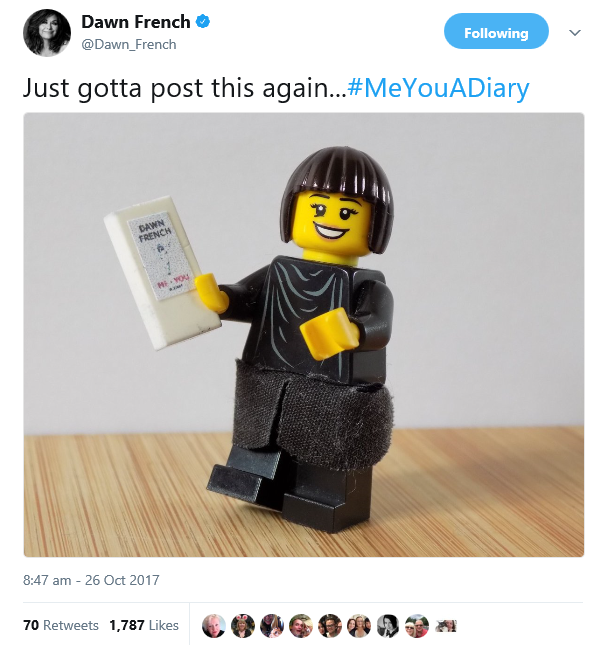 In a way it’s a bit sad that letters aren’t seen as sacred anymore (perhaps they never were) but you can see why celebrities might not want to write deep personal stuff to their friends or family, let alone fans. The desire to “share” these days can be too tempting I’m guessing. So I have made a rule. I will only take a photo of the “Dear Dinah” bit of any proper letter from friend, family, famous person or foe. I decided that was enough to see what their writing looks like I think. The rest is staying private.

One thought on “Adventures in Letter Writing No. 5: Lego Dawn French and Signed Photos”