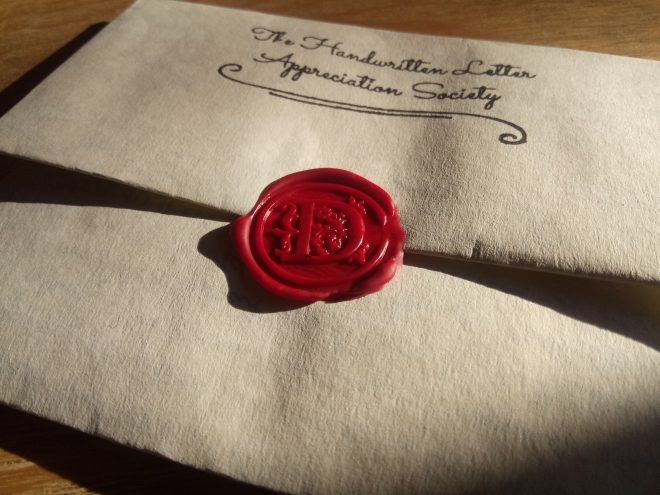 If you’ve received a letter from me of late, chances are it was written on parchment paper with a quill and wax-sealed. It started off as a bit of fun asking people to send wax-sealed letters to a big old house that’s now an outdoor centre, to possibly re-enact what it must’ve been like for the owners in the 1800s, but then I thought perhaps I ought to send some too, and once I’d started I couldn’t stop.

I urge everyone to have a go. It’s eccentric and funny, and really who wouldn’t be impressed to find one on their doormat. The great explorer and adventurer, Sir Ranulph Fiennes, must’ve been impressed with his because he actually replied.

You only need a big feather cut into a point, some ink, parchment paper, sealing wax, a seal and some matches. For me lighting the sealing wax is probably the most emotive part. I’ve realised that I’m slightly hooked on the newly lit match smell which transports me back 35 years to having campfires up the garden as a kid.

Fire is fascinating isn’t it. I don’t mean in a pyromaniac type way, I just mean our long standing history with it. I go a bit day-dreamy looking at the embers shimmering away thinking our ancestors must have done the same. Obviously you need to take care around naked flames and whenever we have fires you can always hear me saying “Play with fire, you’re sure to get burnt”, but I hope everyone reading this has had a campfire at some point in their life.

We had the first clear, perfectly still, moonlit evening in ages last week, and now we’ve got the campfire site back, out I went to have a play and toast marshmallows. It was the first time in ages that family members joined me too. Honestly, nothing beats the smell of woodsmoke and time spent sitting around a fire together to keep warm.

Even when our campfire site was taken over by a trampoline I still felt the need to have a little fire or two. Some might say my rusty wheelbarrow top was a bit cheapskate, but I like to think more Recycling Guru. It worked, that was the main thing.

And the little wax-sealed letters. I sent one to Bear Grylls on his tiny Welsh island the other day, just as an exercise in Extreme Letter Writing, and I think my last piece of parchment paper is going to go to Ray Mears. About 17 years ago I went on one of his Fundamental Bushcraft courses where I learnt to make actual fire by friction – truly one of my greatest achievements (another thing you all must do).

But the new found love of sealing wax? I trace it all back to one of my early performances at Primary school as the Walrus in Alice in Wonderland…

The time has come,’ the Walrus said,
To talk of many things:
Of shoes — and ships — and sealing-wax —
Of cabbages — and kings —
And why the sea is boiling hot —
And whether pigs have wings.’

2 thoughts on “Adventures in Letter Writing No. 59: Of shoes, and ships, and sealing wax…”