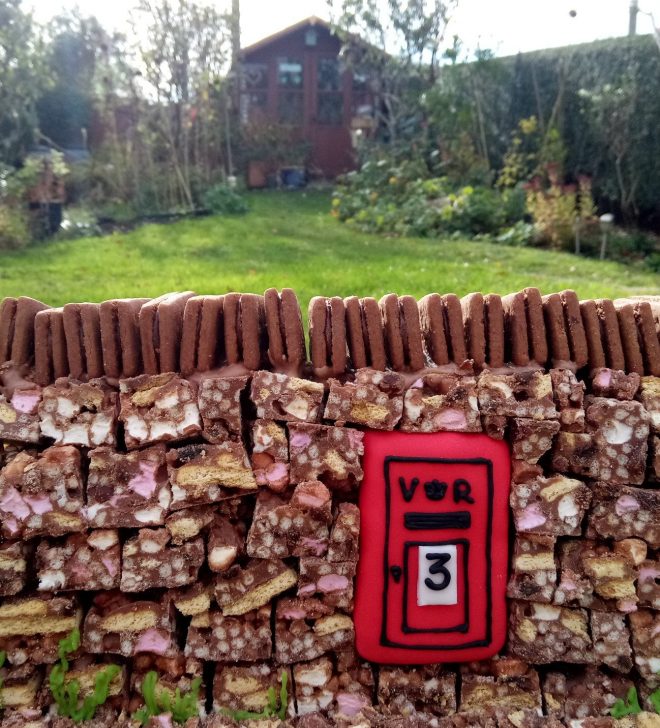 Time rather expands and contracts at the moment doesn’t it but in terms of our 3rd Birthday celebrations I can’t believe it was over three weeks ago now! I just wanted to write a little blog to say thank you so much for all your kindness and enthusiasm and for helping me to celebrate especially as it feels celebrations are rather few and far between these days.

Thank you so much for all the beautiful cards that came and presents. I wasn’t expecting that, you lovely lot. They all looked so pretty on my writing desk up the shed. Liz from Lincolnshire had made a card which even included a photo of me woggle hopping (nearly!), Mike from Virginia sent more stickers, big ones this time, of a competition entry I did for a magazine, and Marjorie from Somerset sent a bundle of postcards of the Royal Mail Postbus in various locations. They’ve become my Postal Pin-ups, as much as I know it should be Postman Pat!

I have to say I was delighted with how the birthday cake turned out, inspired by all the fab photos shared on #PostboxSaturday. It was nearly an It’s a Knockout challenge carrying it outside for a photo-shoot on location with the Letter Writing Shed but how thrilled was I that Royal Mail shared it on their Instagram page! I think I confused them by saying we found one in Cerne Abbas that looked spookily just like it but it didn’t matter. Someone even said they thought it was a real wall. It was a giggle dry stone walling with Rocky Road Mini Bites, and cementing capstone Bourbon biscuits in place with icing sugar mixed with chocolate powder. The main cake was a Victorian sponge (the only cake I can bake) but it was rather fitting with the Victorian wall postbox and Queen Victoria being my birthday buddy.

It was great fun going on the BBC Radio Solent Dorset Breakfast Show with Steve Harris and team, and giving a talk to West Ealing WI during the week, so although there wasn’t the opportunity to go out and inspire people in the community at least it was made possible virtually.

On the day we popped out for a little walk to leave a couple of letters to random strangers, and I know some of you took part as well. I’ve done the walk since but both times forgot to check if they’d gone. Hopefully they brightened someone’s day. I like the thought of guerilla handwritten letters of loveliness at any time of year too.

We didn’t get an official mention on BBC Radio 2 (I don’t think?) but Zoe Ball did play Stevie Wonder’s Signed, Sealed, Delivered, I’m Yours as the very last track on her show on the day, and seeing as we’d written in asking about it, I like to think it was for us.

Once again thank you so much for helping us to mark the occasion. It really was a birthday to remember and all because of you guys making it so special.

Here’s to having a proper get together on our 4th if not before!

2 thoughts on “Adventures in Letter Writing No. 68: Third Birthday Thank You!”