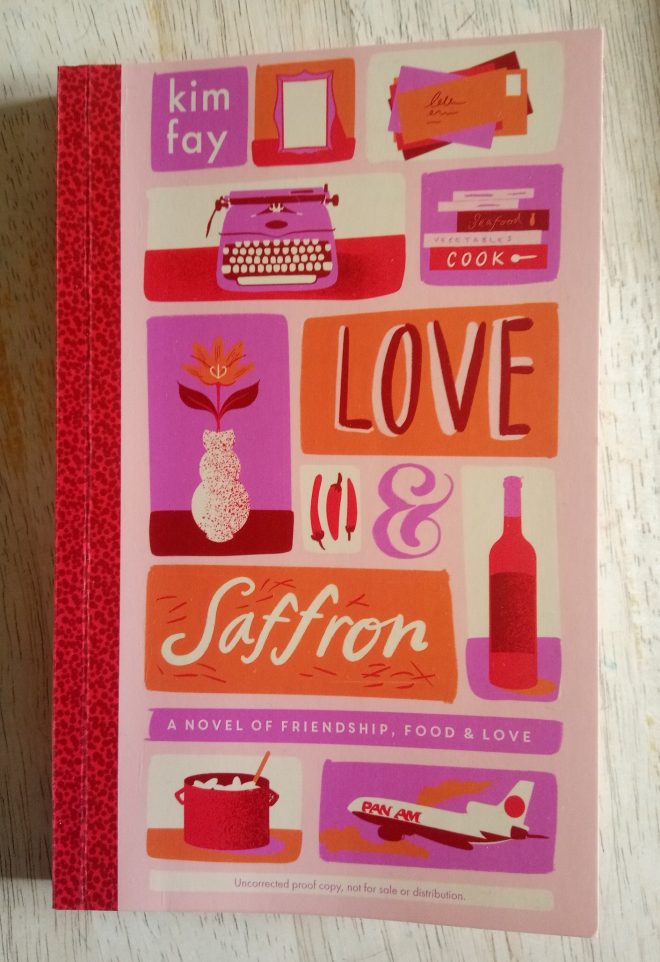 Delighted to be asked to be involved in a book giveaway of the wonderful story, Love & Saffron, an epistolary novel between two women in America in the 1960s. As part of the giveaway we are also giving away two memberships for someone and a friend.

As described by John Murray Press:

“Written almost entirely in letters and inspired by real people, Love & Saffron follows two women in 1960s America who defy generations and geography to discover that food really does connect us all, and that friendship and laughter can bond us for life…

When twenty-seven-year-old Joan Bergstrom sends a fan letter – as well as a gift of saffron – to fifty-nine-year-old Imogen Fortier, a life-changing friendship begins. Joan lives in Los Angeles and is just starting out as a writer for the newspaper food pages. Imogen lives on Camano Island outside Seattle, writing a monthly column for a Pacific Northwest magazine, and while she can hunt elk and dig for clams, she’s never tasted fresh garlic – exotic fare in the Northwest US of the 1960s. As the two women commune through their letters, they build a closeness that sustains them through the unexpected changes in their own lives.

Food and a good life – they can’t be separated. It is a discovery the women share not only with each other, but with the men in their lives. Because of her correspondence with Joan, Imogen’s decades-long marriage blossoms into something new and exciting, and in turn, Joan learns that true love does not always come in the form we expect it to.

Into this beautiful, intimate world comes the ultimate test of Joan and Imogen’s friendship – a test that summons their unconditional trust in one another.”

TO ENTER: (For publication reasons this is a UK ONLY competition)

Simply let us know of a recipe that you have either sent, received, or would consider sending with a letter to a family member, friend or maybe even a stranger. The competition will run across Twitter, Instagram and Facebook but people can also comment on this post or email me via thlas@outlook.com.

Everyone who comments, their name (and recipe) will be added to a pot, and a lucky winner will be drawn on Valentine’s Day (14th February) at dinner time (6.30pm).

The winner will receive a copy of Love & Saffron and also be able to nominate two people (these can be anywhere in the world) to become members of The Handwritten Letter Appreciation Society. This can include you, or if you are already a member, two friends of your choice.

ABOUT THE AUTHOR, KIM FAY:

Kim Fay is the author of the historical novel, The Map of Lost Memories, an Edgar Award finalist for Best First Novel, and the food memoir Communion: A Culinary Journey Through Vietnam, a Gourmand World Cookbook Award winner. She created and served as the series editor for the “To Asia With Love” guidebooks, and was the Hotel Editor for the travel, food and lifestyle website, Gayot.com, for thirteen years. In addition, she reviews crime fiction in translation and works by Los Angeles authors for the Los Angeles Review of Books. She is currently the Managing Editor/Content Manager for The Animation Guild’s Keyframe magazine and website. She says: ‘In our fast-paced world, I believe that it’s important to slow down, and Love & Saffron is a tribute to a more leisurely time, when writing a letter to a friend was a part of the pleasure of living. In these hurried times, I hope my novel serves as both a balm and as an inspiration to pause and relish life, especially over a meal with friends.’

Below are some wonderful recipes people have already shared. Looking forward to adding some more!