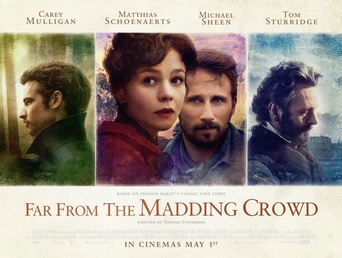 After the lovely evening watching The Guernsey Literary and Potato Peel Pie Society together we thought we would watch the new Far From The Madding Crowd in celebration of Thomas Hardy’s birthday on Wednesday, 2nd June at 7.30pm (UK time).

We were due to be at the Thomas Hardy Victorian Fair last year to celebrate his 180th birthday and encourage some letter writing in Dorchester but sadly that has yet to happen, so it will be lovely to enjoy his work on his 181st birthday instead.

Back in 2018 during our inaugural outing to Purbeck Valley Folk Festival we were generously loaned the beautiful Writer’s Hut from Plankbridge Shepherd’s Huts as our wow factor. Not only did the owner of Plankbridge, Richard Lee, appear as an extra in the film but they made the huts used in it too. You can tell a Plankbridge hut by the distinctive pattern on the wheels.

Again it’s not a livestream, we’re just asking people to find a copy of the film on DVD or to download or stream themselves if they would like to join us, and we’re all going to press play at 7.30pm.

Hope you can join us!