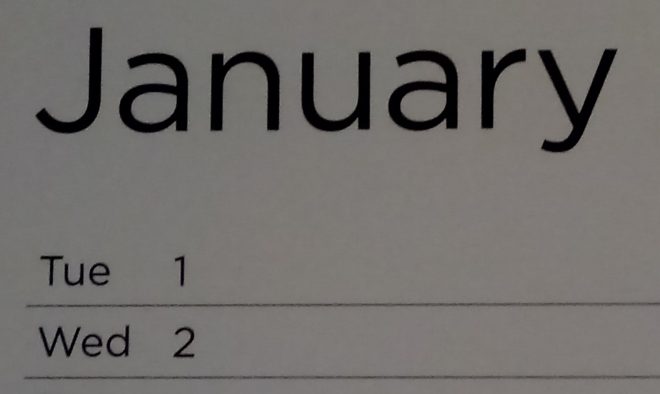 Poor old January. I feel a bit sorry for it to be honest. What a month to be. Few people have any money; Christmas, good or bad, is over; it’s the month with the most depressing day (apparently); the days are short, the nights are long; most people have gained unwanted pounds; it’s mid-winter good and proper. Not only all that but those New Year’s Resolutions made in earnest are in danger of falling by the wayside by the middle of the month. Even the Saxons knew January as the “month of the wolf” as they were known to come closer to the villages in search of food. At least the Romans optimistically named it after their God, Janus, meaning “doorway to the New Year”, but that’s only one positive against a good many negatives.

June or July never get such bad press do they? And heaven help you if you have a birthday in January. People try to be upbeat about it but you can sense behind the smile they think it all a bit of an inconvenience. I even feel a bit sluggish writing this. Admittedly not helped by being down the launderette for the second time in as many days. I don’t ever remember actually running out of clean towels over Christmas before. I’ve just shoved them all in the 50lb dryer. It seems a life-skill I am missing, but I do not know how to judge the weight of wet laundry by holding it in my arms!? Why are there no scales? Let’s hope it doesn’t break in the time it takes me to write this.

Anyway this was meant to be about talking January up! If you’re not by now crying into your cup of tea I’ve been thinking maybe the humble handwritten letter can save us from the January blues. Really, I know writing a letter might seem counter-intuitive in the making us feel better stakes (receiving one surely seems more likely to bring joy doesn’t it?), but I genuinely think the outcome is equal. I don’t generally ever ask people to trust me on something but trust me on this. If you’re feeling a bit fed up with it all, do take a moment this January to write someone a letter. I can’t guarantee they will write back but I promise you will feel better for it. I have sent many a letter with no reply but I quite like the wonder as to did it ever reach its destination, did the intended recipient read all my waffle. The not knowing is part of the fun in a way. Your letter doesn’t have to be an essay or of literary award standard either, just tell them about your day, even if like me it does include expeditions to the launderette. I’m sure any moment now a Nick Kamen will pop in, January or no. (A girl can dream…)

But I think between us we can help people view January differently. How happy do you feel when someone writes you a letter? Letters drive away the cold and the dark and the being on our own like nothing else and shine a light all day long and beyond. Maybe we could start a whole new Jolly January campaign. OK, maybe it needs a better title, but hopefully you catch my drift.

So here’s to January – the perfect month to write letters. Let’s do this! (I think I missed my vocation as a motivational speaker!?) Pass it on.