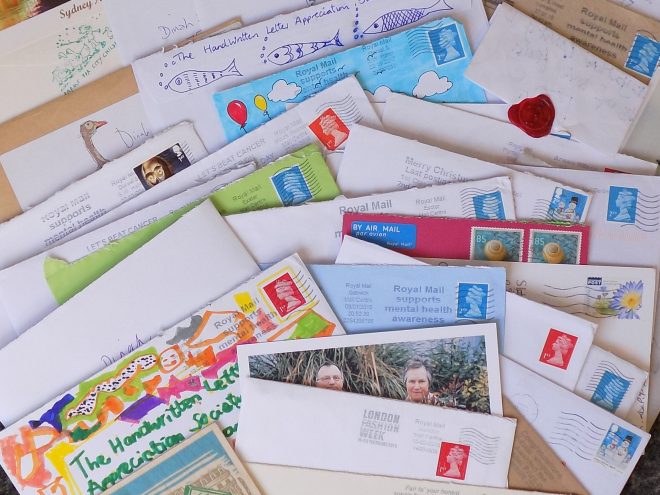 Showing off, now that’s a Very British Problem isn’t it.  But really, look at all my post I’ve received since I set up The Handwritten Letter Appreciation Society.  I don’t want it to be showing off.  I want it to be encouraging.  I’ve had some great text messages and exciting cyber moments (George Clarke, Simon Garfield, Purbeck Valley Folk Festival, Dorset Magazine) but the two things are completely different from getting this lot through the post.  Some of you will get twenty times this in one day I’m sure (especially if you are famous) but honestly when three whole proper letters plopped onto the doormat altogether last week (one from abroad, one being the long awaited reply from my Dad, and one with a wax-seal) you can imagine my delight!

The one from abroad I spent at least 30 seconds going “Who is this from? Whose handwriting is that!?”  Tragic?  Maybe, but that is the first letter I’ve ever had from our lovely friend of 20 years.  I don’t mind if she never writes again (to be fair she only lives round the corner) but her letter from Switzerland (first Air Mail letter in forever too) will be kept treasured (as they all will).  That’s what I mean about people’s handwriting and knowing what it looks like.  Such a small thing really, but a huge part of them too.

So my current collection of letters is just lovely. (One, what is the collective noun for letters, and two, what is someone called who collects them?)  I have now got a proper pen pal in Dartmoor (neither of us knew of each other’s passion for letter writing until she moved recently), I’ve had postcards from Australia (a friend sent one a week while she was there over Christmas), letters from relatives again whose handwriting I would not have known, of course my few pieces of famous correspondence from Dawn French, Michael Morpurgo, Paul Mayhew-Archer, Mary Killen and Madeleine Floyd (OK – showing off), decorated envelopes, a couple to myself (THEY WERE TEST ENVELOPES I SWEAR!), and just a whole load of loveliness wrapped up in envelopes and stamps and delivered through our door by the hard working posties.

There is a tiny suspicion that my loving family and friends might be humouring me in these early stages so a bit of monitoring over the next few weeks and months will be crucial!  But honestly, please. Send some letters out and see what comes back.  And I promise, this isn’t really about me.  It’s about everyone and anyone writing to each other.  I know, it might seem painfully slow in these nano-second times but I guarantee you it will be lasting.