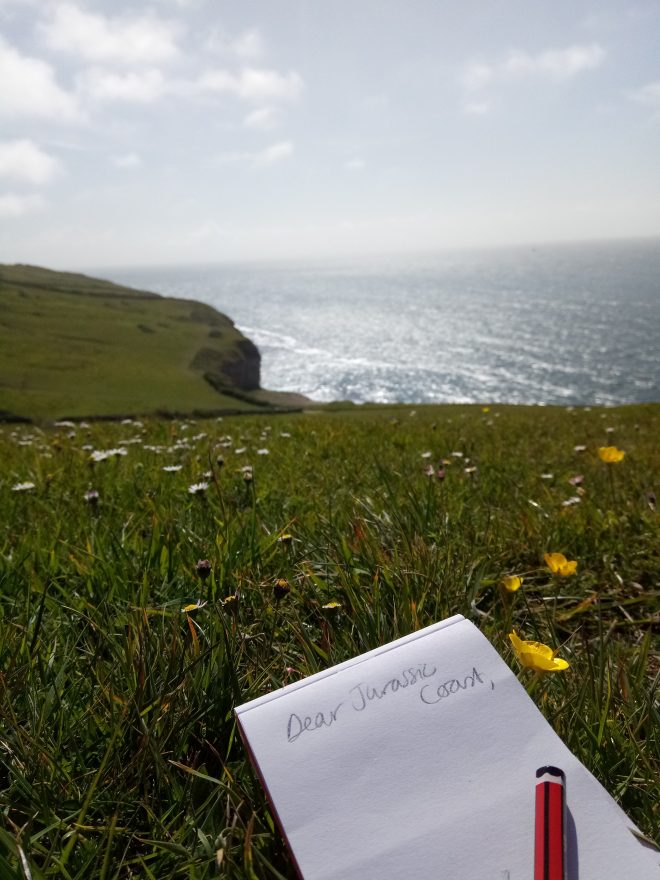 While out on a walk yesterday it reminded me of this short story I wrote a few years ago. It’s a love letter of sorts to a little bit of the Jurassic Coast World Heritage Site…

The Days of May

May closed her eyes just for the length of a pause. No longer. It reminded her of the Christmas services she sometimes went to when she kept her eyes open for the prayers.  She always had a strange sense that someone should, just to check on everyone.  Plus they were sitting at the top of a long steep slope that ran down to the edge of the cliffs and her group of 20 children were only 10 years old.  Perfectly capable and able, and in years gone by probably out roaming these sorts of places on their own, but not today. Of course their teachers were there too but May was in charge of leading the walk.  They’d come to see the English Channel and beautiful coastline down to Dancing Ledge on this late spring morning. Funnily enough in the last days of May.  The month May was born.  It wasn’t the most original of name choices but her mother’s love of that time of year needed no explaining.  May understood.  It felt like the best month to be born in, made extra special, and always made her smile to herself, as she shared her birthday with Queen Victoria.  Her passion for history had jumped late into May’s life but was such an unexpected pleasure.

Between drinking in the turquoise and jade sea, together with the hope of spotting Bottle-nosed dolphins, May glanced from her watch to the group silently catching sounds in their hands, all with their eyes tight shut, or mostly.  A daft little game May thought but one she loved to play and definitely that honed the skill of listening to what’s around you.  May loved the chatter of children on a walk in the countryside, the shrieks from stepping in cowpats and muddy puddles, but loved equally the surprise the children got from sitting silently gathering a handful of sounds, be it the waves crashing against the rocks down on the cliffs, or the wind swishing the grass, sheep bleating in the fields behind, the drone of an aeroplane above, or a bumblebee whizzing past close to someone’s ear.  It was the delight of them sharing with the others what they’d heard. “Oh, I heard that too!”  A little bit of awe and wonder made more so when a whole group of excitable children sit outdoors in silence for one whole minute.  May never tired of that.  After catching sounds the group stayed sitting taking in the stretch of Dorset before them, while May let everyone eat a little snack to keep them going. May never tired of this view either. The light was always different on the sea.  The clouds and sky never seemed the same.  The theatrical beams of light shining down on the water, or the twinkling of a thousand diamonds playing on the waves.  Just to soak it all in and share it with fresh eyes was always a goosebump moment for May.  It was true, sometimes the goosebumps were from biting winds and horizontal rain but as long as everyone was wrapped up warm and waterproofed they could always beat a hasty retreat back to the old barn two fields away to find shelter, or duck behind the wall with the stone-carved cow’s head.  He always gave an opportunity to tell of the extraordinary geology of the area.

But today was one of the best.  Summer was only a breath away, but spring was still in all her glory.  It felt like a tangible promise in the air.  A hope of some sort, that May couldn’t quite ever put her finger on. It gave her that sense of belonging. That happy sigh. It was that too, the unexplained sense of nature May felt was so important to try and impress upon her charges.  Some deep connection to beautiful wild places away from anything virtual. This was real. The echoes of the past lay all around too.  The many people who had seen and shaped this landscape.  Now a beauty spot, but 200 years ago Dancing Ledge was once a cliff top quarry imagined in black and white or sepia tones, like a stage set perhaps. But not at all.  Real lives, hard lives, and all in glorious technicolour.  The realisation that the colours May saw was what generations had seen had been a light switch moment for her.   The walk May and the children were going on had been the daily trudge to hard graft for the local quarrymen, or more excitingly the route down to the contraband being off-loaded at great risk from the boats under the cover of darkness, easing the monotony and hardship of everyday life.  May knew the Moonraker story never failed to amaze and thrill when in her best Dorset accent she would try to impersonate Isaac Gulliver, local gentleman smuggling chief, telling the Customs and Excise men “Don’t be daft, we’s be raking up these ‘ere moonbeams from this ‘ere stream to take home and see by. We ain’t seen no smugglers round these parts”.  Spyway Barn just cemented the location as mysterious and intriguing.  May liked to think of Ian Fleming making up his character James Bond as he ran miserably across the very fields they were standing in. He and his school chums were under strict instructions from a hard-hearted teacher, every morning before breakfast, to run down to the place they were headed, to have a swim in the sea.  May always wondered about the villains in the Bond films and where their characters came from, let alone the revenge exacted on them.  As May looked out to sea she hoped that even those heading underground for the day, or jumping in icy waters, had found some moments when the beauty of the place outshone the misery they felt at the time.  In the distance medieval field systems looked like weird hill fortifications and whenever May pointed them out she always doubted the usefulness of those strips of land dug out and terraced on the hillside.  It seemed like the shortest of short straws to be allocated one of those to try and grow any crops on.  She felt times must have been so different for those hardy ancestors.  The layers of history, like blankets on a bed, only added to the beauty of this land for May.  No doubt the little Stonechats they could hear in the hedgerows were out here just the same as when everything was so close to being lost back in 1940 and the radar scientists beavered away night and day with their long-gone towering radio masts trying to build castles in the sky. There was always so much to tell the children but some of these stories would have to wait until a little later.  For now lunch and rumbling tummies were beckoning the group down to their picnic destination on the stunning ledges, just that little bit closer to the sparkling sea and warm breezes.

“OK, guys, shall we head on down?  Don’t leave anything behind, listen to instructions, and stay behind me.  And whatever you do WALK!”  And with that May picked up her large rucksack full to the brim with everything she needed, swung it onto her back and off they set, eyes on the prize.