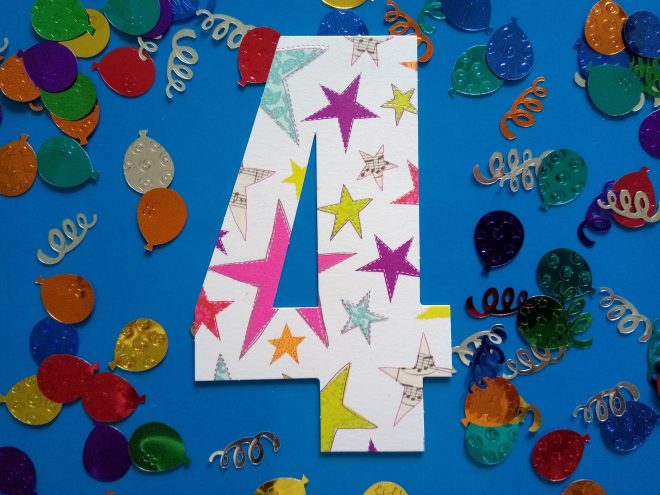 Oh wow! What a 4th birthday it has been! Even though it was almost a month ago I really do still feel like I’m riding on Cloud 9! Thank you so much to everyone for all your love, support, encouragement, generosity and enthusiasm when it comes to The Handwritten Letter Appreciation Society! To all of you, you really do make it the lovely letter writing community it is!

Did I say “Oh wow!” already? But even if I just shared the first few pictures I honestly think it would be enough to sum up what a lovely lot you are. Thank you so much to each and every one of you for coming to the THLAS Members Birthday Zoom and sending beautiful birthday cards and letters and sponsoring one (or more) of the 30 Birthday Postcards and getting onboard celebrating four whole years of THLAS.

We’d never done a Society Zoom get together before but for the record it was totally lovely. A special thank you to Liz Kentish for helping to organise this and letting us use her snazzy Zoom package to make the event work. There were people in the UK, USA, Australia, Germany, Brazil and Sweden, with one time zone making it 3am! That felt very humbling to know someone had stayed awake all night or set their alarm for ridiculous-o’clock to join us but what a lovely giggle we had.

I gave a bit of background to how the Society started and some of the adventures we’ve had along the way; we went into break-out rooms to talk about what is the loveliest thing about letter writing for us as well as our favourite item of stationery or in fact just to have a nice natter; we did a little postcard writing activity together; sang Happy Birthday to “The Handwritten Letter Appreciation Society” (which was hilarious with all the time lags); shared letter writing stories; and all posed for a nice screen-shot which still makes me smile from ear to ear when I look at it. I honestly can’t wait until the #THLAS5 Members Birthday Zoom next year!

As part of a birthday fundraiser to help keep the Society going people could sponsor one of the 30 Birthday Postcards to be sent to anyone they liked to anywhere in the world and then we would go on a Postbox Crawl to all 30 Swanage postboxes on the day. There were some wonderful choices of recipients including friends, authors, the Penguin Post Office in Antarctica, the northernmost Post Office in Svalbard, Museum für Kommunikation in Berlin, sponsors themselves as well as a few famous folk to make up the numbers.

We took photos of each postcard being posted so people could see which postbox theirs went from. It felt such a nice way to celebrate the actual birthday so thank you so much again if you were one of the people to sponsor a postcard.

We had lots of entries for the Society mug giveaway which was drawn on the day. It’s also great to see where these end up around the country and what adventures they go on.

I’d really been hoping for a bit of woggle-hopping (leap-frogging) by some parkour experts but although that didn’t happen for our birthday celebrations I’m still holding out hope that it might in the future and we did a little bit of Postbox Parkour for ourselves anyway.

It was lovely to pop into Purbeck Coast Radio to have a little chat with DJs Karen Grant and Steve Zodiac all about how the Society has been getting on and some of the things we’ve got up to over the last two years when we last talked. More of a visual rather than for radio but it was nice to describe my Dad’s “big” letter to the listeners.

It was fun dropping off some of the THLAS4 painted pebbles around Swanage and beyond. One made it to Spain which was very exciting and another was left by Jonathan Ross’ (off the TV) Swanage residence. There was even a live drop-off via the webcam at Corfe Castle Railway Station. It’s nice to wonder whether they all found new homes or got dropped off somewhere else around the country.

And finally our 4th Birthday Cake! We’ve created rather an obsession with #PostboxSaturday so it only seemed right that the cake this year should be a postbox but as the Society is first and foremost about writing letters they had to feature somewhere. It probably shows that I’m a long way off being a professional cake maker but our little wonky Anonymous high aperture postbox did us proud and you could even get at the posted letters when we cut into it.

Thank you so much again for making our 4th Birthday just the most loveliest, and here’s to another year of spreading the word for the humble but mighty handwritten letter and getting the world writing them again!