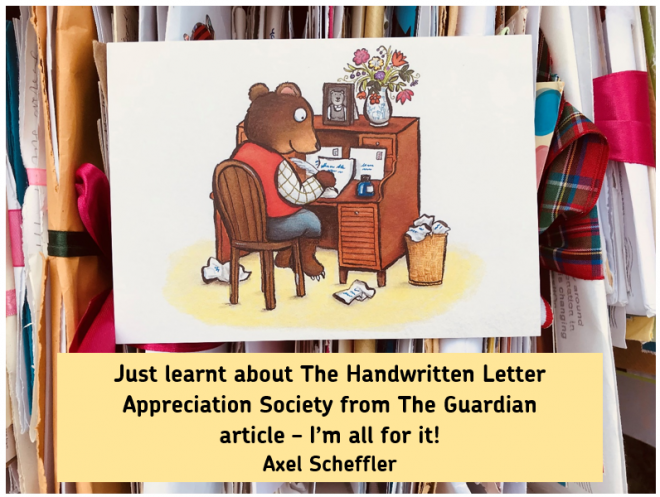 It’s been just over two months since we appeared in The Guardian over the new (but I’m not sure improved) bar-coded stamps, and try as I might, looking at them still evokes a sinking heart feeling. The piece by Simon Usborne initiated lots of discussion and raised the profile of letter writing and philately, and amazingly led to over 100 new members at THLAS. It’s a bit difficult to gauge my relationship with Royal Mail from it but then I never did hear back from the CEO, Simon Thompson, in response to a letter I sent him back in February. But to be fair, he’s probably up to his neck in it at the moment, so I don’t mind.

It definitely all went a bit bonkers the week after the article went to print. I knew something was going out at some time but didn’t know when, and having woken up on Monday, 4th July, thinking it looked like a straightforward, not very eventful week ahead of me, I was quite surprised to see lots of notifications on Twitter pointing me in the direction of The Guardian piece in the G2 section. By the end of play that day I’d had various requests for interviews, lots of new members and a little turn on BBC Radio 4 speaking to Evan Davis. That’s all a strange out of body experience if ever you’ve done it. Media people that you are so familiar with either from your TV or radio, and there you are having a little chat with them on quite high-powered national radio. I always feel very honoured and flattered to be asked even if it is surreal to be sandwiched between hard-hitting headlines, but as I always remind myself THLAS is a light-hearted Society with an important cause – to put letter writing and handwritten letters back on the map for everyone.

I appreciate some media outlets thrive on controversy but 1) I don’t want to sound like an angry person, especially about stamps, and 2) I just prefer the discussion and analysing what I and others think about an issue. A friend said she thought I wasn’t as angry and controversial as Evan would’ve liked but a couple of people I know stopped me in the street and said they’d heard me coming out of their wireless and how they’d enjoyed it, which made me chuckle. My uncle in Reading even heard me and got my aunt to telephone my Mum to say so. Fame, hey!

Sky News got in touch to record an interview (eek!) but as it turned out another Johnson stole the limelight that day (I think I was secretly relieved), and The One Show got in touch too. The young researcher I’m not sure understood what he’d been assigned to, and also caught me a bit off-guard. When I said I’m not out to make an enemy of Royal Mail (in fact if anything the Society is totally out to help them) he said “Well, yes, they’d be a powerful enemy to make”, which rather got my goat – where does that expression come from? I did email after to say really THLAS is about encouraging and inspiring people to write letters (and buy stamps) and could the piece be more about that than the ugly stamps – I had to point out if it went ahead, with or without me, my annoyance at the bar-codes had actually got Royal Mail a slot on primetime TV for free so I can’t be all bad. I haven’t heard back.

Anyway, the biggest coup from it all is that the amazing Axel Scheffler, illustrator of Postman Bear and the Gruffalo, saw The Guardian piece and wanted to join! Stephen Fry might now eventually get a break from me going on about his letter and Axel might have to take up the baton.

And double amazingly, we are really nearly 1,000 members strong! (936 at time of writing) The four zeros on the certificate were more because I found them pleasing to the eye. I never imagined we actually need them all!

What a week to remember!

One thought on “Adventures in Letter Writing No. 83: How To Make Friends and Influence”