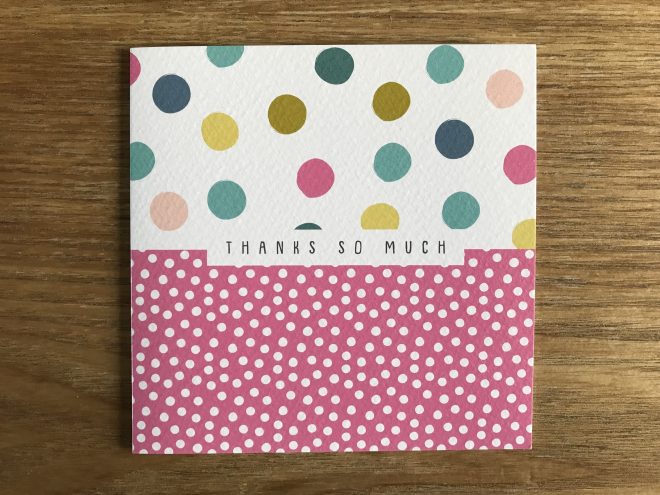 It’s always flattering to be asked my thoughts on a particular topic regarding letter writing, so it was a lovely surprise to be approached by author and writer Sophia Money-Coutts about thank you letters and their dwindling existence. Here are my ponderings…

Should we always send handwritten thank you letters?

As the Founder of The Handwritten Letter Appreciation Society, I would say on the whole, yes. Not to make you a good or righteous person (it will do that) or because you ought to, but because it’s a lovely opportunity to put pen to paper to someone who spent time thinking about you enough to send a gift. The problem I have is that I don’t want to come across as judgy when it comes to thank you letters which is always the danger. I actually quite like it if occasionally someone doesn’t send one for something I’ve sent because it relieves the guilt and pressure if ever I miss one for some reason too, and maybe we can get a bit precious about thank you letters. I also think I can’t be very objective about the subject because in my mind if you feel moved by something of course write a letter! Why would you not? I can’t think of anything nicer than letting someone know via a personal letter that their gift arrived, or the day out was lovely, or how grateful I am that the person wrote to someone I asked them to (Stephen Fry, Alan Titchmarsh, Dawn French can vouch for that) but I know a lot of people don’t feel the same.

It’s interesting the dread that surrounds thank you letters; some might say a horrid chore which takes the shine off the gift that someone gave you. You might not even like the gift so writing a thank you letter would seem like adding insult to injury. A text or phone call is far quicker and cheaper these days and gets the job done in no time, but somehow deep down it never feels adequate enough. And we all know it, however much we kid ourselves.

Also, if you like getting the gifts, sending a thank you letter should perhaps be part of the deal. A kind of credit note for next year’s present. I need to ponder this more, but I wonder if maybe senders of gifts should start being a lot harder. We all feel hurt if something we do isn’t acknowledged so why should we just absorb that if people don’t care in return. But then isn’t a gift exactly that – should we always expect a thank you?

Communication has of course changed over the last few decades, and we’ve got into the habit of “communicating” with lots of people in one foul swoop, whereas here at THLAS we’re about rekindling the intimacy of the one-to-one that so many of us miss out on these days. I wonder if although a text or email might appear to many a rude way to say thank you, it’s just that generally we’ve got out of the habit of writing letters, and thank yous always feel so formulaic that you’d be excused for thinking “Why bother?” But maybe if letter writing became part of our lives again, the thank you letters really wouldn’t be the chore everyone takes them for. They’d be a wonderful opportunity to put pen to paper to someone, regardless of any present sent.

The demise of the thank you letter feels a bit sad, like something childlike has gone and something more moody and ungrateful has taken its place. However, for better or worse, there are no Letter Police to enforce the mandatory writing of thank you letters, so our approach at THLAS is to encourage and inspire letter writing in general, to help people reclaim it for themselves, to “fill your paper with the breathings of your heart” (as someone famous once said), and to write whatever thoughts and questions you might have of the person you’re writing to. Maybe like letters, gifts should never come with an expectation of a reply, but if the world loved letter writing again, would they not come more naturally?

I’m loathed to be bossy because it’s an awful personality trait but perhaps it would be better to say, “Just write the thank you letters – everyone will feel better for it, including you!” Or if you don’t like bossy (who does) may I suggest you just write someone a letter out of the blue and see how you get on. I’d put money on it you won’t regret it.

One thought on “Adventures in Letter Writing No. 85: To Thank Or Not To Thank?”